The yen weakened to 120 per dollar for the first time since July 2007, as policy makers’ decisions to expand monetary stimulus and delay a consumption tax increase highlight the risks the economy is deteriorating.

The yen has plunged 9 percent since the Bank of Japan on Oct. 31 increased the annual target for expanding the monetary base to 80 trillion yen ($667 billion), and Prime Minister Shinzo Abe delayed a second bump to the sales levy by 18 months, after the first in April sent the economy into recession. Abe is forecast to score a second landslide victory in a Dec. 14 election.

“It’s still the divergent-growth, divergent-policy story,” Robert Sinche, a global strategist at Amherst Pierpont Securities LLC in Stamford, Connecticut, said by phone. “We are seeing capital flows out of Japan, and I think that helps bring capital out and continues this movement down in the yen.”

The yen has been trading between 117 and 120 per dollar for almost three weeks, as traders trying to push the yen weaker ran into a wall of options centered around the price.

There were $3.01 billion of over-the-counter foreign-exchange options on the dollar-yen with a strike price of 120 that expired at 10 a.m. New York time, according to Depository Trust Clearing Corp. data tracked by Bloomberg. The strike price is the exchange rate at which call option holders can buy the underlying currency and put owners can sell.

Some options contain so-called barriers, causing the contract to either expire or to be activated if the pre-set exchange-rate level is reached. These types of contracts can also cause traders to attempt to push a currency through or away from barrier triggers. The barriers are often used as they reduce the cost of the strategy because they decrease the odds the options will be profitable.

The unprecedented stimulus by the Bank of Japan contrasts with the Federal Reserve’s discussion about raising interest rates as the world’s biggest economy strengthens, prompting further weakness in the yen. The Japanese currency will slide to 124 per dollar by the end of 2015, according to the median estimate of analysts in a Bloomberg survey.

Click here to read the full article on Bloomberg

China’s decision to cut its benchmark interest rates for the first time in two and a half years reflects the recent deterioration in economic data. With GDP and inflation both at four-year lows, Chinese authorities cannot content themselves solely by reducing the required reserve ratio on banks as wasthe practice in 2011-2012.   The impact of China’s move is a classic play of boosting global equities, commodities and their currencies, reinforcing investors’ preferred play of shorting EUR and GBP vs the Canadian dollar. Yen weakness returns to the fray alongside the rebound in equities, proving that any USD/JPY pullback is a temporary opportunity to admit bulls into the December-Abe party.

–        Thursday’s flurry of manufacturing and services surveys from the US, China and Eurozone confirms the status quo in the currency markets; a cooling off in the pace of US manufacturing expansion, despite remaining the highest rate in the G7 –, while both Germany and China eked out an expansion, albeit at a slower pace, as did the pan-Eurozone measure of both sectors. France remained in contraction territory.

Click on the logo to read the full article on CityIndex. 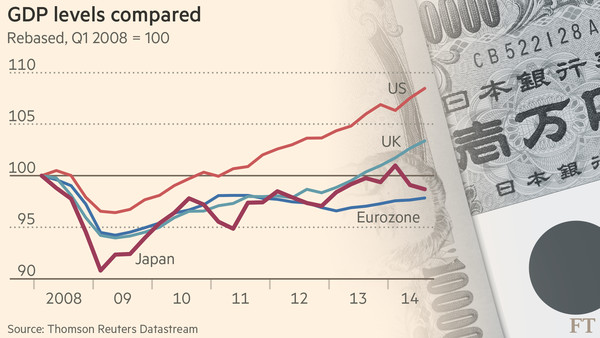 So where does “Abenomics” go from here?

Less than two years ago, Shinzo Abe’s big idea was to boost Japan’s growth rate to about 3 per cent a year on a nominal basis and 2 per cent on a real basis, and then to use that momentum to repair the government’s stretched finances. That was the main objective of the incoming prime minister’s “three arrows” of flexible fiscal policy, loose monetary policy and a host of longer-term reforms.

But Monday’s surprise data on third-quarter gross domestic product showed just how ambitious those targets were. Far from expanding at an annualised rate of about 2 per cent during the period – as almost every private-sector economist assumed it would – real GDP shrunk 1.6 per cent, as a tepid recovery in consumption, exports and public spending following April’s tax increase was offset by weak capital spending and big cuts in inventories.

Analysts said the numbers – on the heels of a 7.3 per cent contraction in the second quarter – seal the deal for a deferral of the second stage of the consumption tax increase, scheduled for October 2015. If Mr Abe really wants to keep his vision intact, said Etsuro Honda, a close adviser, then the emphasis must shift to ways to lift growth.

Read the full article on the Financial Times online by clicking here.

Currently trying to chew through offers into 0.7910. What a difference a day makes eh?

Currently enjoying some love at 1.2460 but tempered by euro pairs finding some sell interest after good demand so far

The Forex Quotes are powered by Investing.com.